Intelligent property investors usually wish to make significant rental income on their investment in addition to property appreciation. Typically, a rental investor would want at least 5% rental return profit per year on their initial capital investment in addition to any property appreciation they can get. An open-minded investor would seek high return opportunities in any area with reasonably stable, secure growth. That is why I chose to extend my previous analysis of Portland property values to the entire nation, and added rental price increases to the analysis.

The US Census spatial data, Zillow house value data as well as rental price data,
and Foursquare API data were used to estimate the best Zip code in the
United States to purchase a residential investment property. The analysis was very similar to the Portland analysis described before, except this time rental price metrics were also considered and the entire nation’s house price data was used to select investment.

Zillow house price data was downloaded. The MoM, QoQ, and YoY Zillow housing value index house price changes of December 2019 were appended to the Zillow rent price change indices for the same time period for all zip codes in the United States. A k-means elbow analysis was performed on the data. From this analysis, the staggering difference in house prices across the country was observed.
Of the 11 clusters, two had mean house prices over $1M. These are regions near the the largest cities in America such as New York, San Francisco and Los Angeles. It is also interesting that some of the most expensive groups had the greatest declines in rental and house prices over the 2019 year and quarter. This may be due in part to the increasing adoption of work from home lifestyles for the most skilled workers at high paying companies, allowing them to move to locations where they can have more relaxed and luxurious lifestyles for their money.

For a profitable property investment, one would want purchase price increases AND rental cost increases in the area. Based on the price change metrics graph above, a threshold of 0.001 increase across all metrics seems reasonable. Using this threshold, 5 Zip codes are worth investigating in the entire United States.

It’s exciting to see that Austin, TX is the first zip code in the list. Austin a relatively affordable city with nice weather. It is sometimes referred to as the “Silicon Hill” due to the plethora of large tech companies with locations there such as Samsung, Dell, and the recently announced Apple location.

In the effort of being ignorant and open-minded,  the local venues were also counted for each Zip code using the Foursquare API. Springfield, MO, Austin, TX, and Jackson, ID give a good combination of price increases and entertainment, suggesting that their price increase may not be an anomaly and there will be something to do if you move there. Based on what I know of these cities, Austin would be the most trustworthy choice. However, Wichita Falls, TX appears to have the highest monthly rent-to-price ratio with a gross rent return of 1% of the home value per month.

What about the other locations? Does anyone know what kind of local changes are leading to the price increases in the other Zip codes? 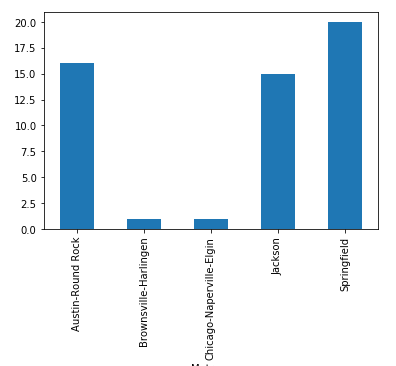